Posted on November 6, 2017 by Hellosailor

Trying to figure another thing out.

Last weekend one of my very close work-friends/subordinates text me ” Can I call you? I need to talk”. That crapped me up straight away.  1. I hate talking to anyone on the phone, 2. My brain is racing because she didn’t say what it was she wanted to talk to me about and now I’m imagining about six billion things.

First thought – “What in the actual fuck, he’s married with two kids!!!” So I ask what happened.  This is the story she told me (for the sake of the story she will be Doll) –

On Halloween evening everyone in the work place decided to go out for fancy dress and alcoholic beverages. Both our bosses were there as well as some of the employees.  Everyone is getting wasted. I don’t go out, and part of this reason is everyone gets wasted and it makes me feel uncomfortable as it is like they act like a different person (and it reminds me of the time a drunk guy trapped me in a phone box).

Boss Number One, whom we shall call Gobby, gets very gobby and loud and opinionated when she’d has a few.  She’s slagging Boss Number Two (O) off behind his back, but as she is pissed as a fart she is saying it loud enough for the whole pub to hear.

O is obviously not very happy but shrugs it off.  As he is also wasted he’s now slagging his wife off saying he hates being tied down, hates having kids, his wife needs to deal with the fact that he’s still going to go out drinking and do what he wants wah-wah-wah.  Gobby, who has kids, got very offended and they had an altercation.

O didn’t want to be around Gobby anymore so left the pub.  Doll hadn’t had a lot to drink and was worried he was not going to be able to get home by himself so offered to walk him home.

Half way home he hugged her.  She though “this is odd” as O is one of the least touchy feely people in the world.  He is like my level of “don’t touch me”, perhaps he has a case of the even more severe “don’t touch me’s” than I do. 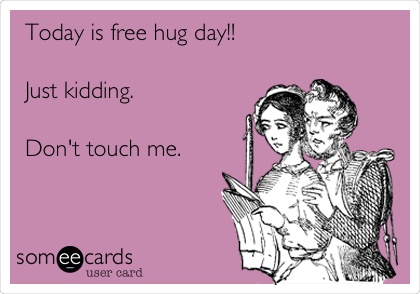 He leaned in for a kiss. She said what the fuck are you doing. He stopped and was very embarrassed.  He thought she’d been flirting with him all night so went in for a kiss.  He thought it was OK because “people fuck their bosses all the time”.  He called this the icing on the cake for how bad the night had been.  He apologised and she said “don’t worry it’s fine”.

Doll went home. Seemingly, so did O. In the morning he text her and apologised again, many times.  Each time she said “it’s OK, it’s fine”.  Only it’s not fine.  He asked her not to tell anyone.  She said OK, but told me and three other people (I know a fourth person who knows via someone else.  I am of the strong opinion that if you want to keep a secret don’t tell anyone).

Doll is signed off of work sick.

She’s currently refusing to face O.  I think I would do the same, hide my head in the sand until I was ready to come out/forever depending on which one happens first.

I know Doll very, very well. We have a similar life path, apart from the whole sectioning thing.  We are both wired very differently to the rest of the population.  I think if she had a diagnosis she would also be Borderline.  I know I’m not a psychologist, but I can see the traits that I know very well from my own personality in other people.  She is like a daughter to me if I had a kid when I was a teenager. She gets me and I get her.

I have worked with O for probably two years. He is highly intelligent and socially awkward, but that’s always been OK as we can talk about geek stuff and I’m awkward any way.   He has supported me with Mum’s cancer, H’s depression and my mental health. I feel bad that I immediately judged him after he tried to kiss Doll.  It is very unlike him and as much as I want to go round his house and yell at him to “sort-you-fucking-life-out-why-would-you-try-to-kiss-one-of-your-employees-why-do-you-think-it-is-ok-to-cheat-on-your-wife-who’s-just-had-a-baby!!???” There must be something else going on for him to act out this way. It is so not him.  Also what is not him is how glum he has been at work this week.  It’s not just wishful thinking because I know he fucked up and has something to feel bad about, everyone has noticed.  I think he knows he’s fucked up mega big time and is worried about the consequences.  I know I would be.

As much as I think I don’t have friends, I am friendly towards people. I am Doll’s friend.  I am here for her to lean on. I worry that if O think’s no one knows, this is eating him up inside.  Sometimes people just need to get it all off their chest.

What I plan to do is speak to him about the situation, as a friend, not an employee.  Not to tell him off, but to make sure he is alright and to let him know that I am around if he has a problem he needs to talk about.

I also want to be able to support both Doll and O in case this does go to HR (Doll has not decided yet).

ALSO on this night out – Two senior members of staff asked a junior member of staff if they wanted some cocaine. They then went and did cocaine.  They’re fucking nuts.  I don’t know if I have to report this or not.  Whistle blowing is dodgy, but not doing it is also as dodgy, so I will fight with this one mentally for a bit.

It’s like I work on the set of a soap. I couldn’t make up half the shit that goes on, like night staff boinking, affairs, drugs and all sorts of sordid things………

Often I’m glad to come home and sit in my pyjamas with my boyfriend and cat.

Writer, painter, nurse. Borderline, Bipolar, awesome.
View all posts by Hellosailor →
This entry was posted in Borderline, General Thoughts, Uncategorized and tagged blogging, cheating, life, morals, what in the actual fuck, why I don't drink. Bookmark the permalink.
%d bloggers like this: