Posted on February 3, 2013 by Hellosailor

I’m excited (or some thing like that.  I’m not sure I can be excited and depressed at the same time, but, I’m Borderline so whatever) to share with you a new painting “Gail”. 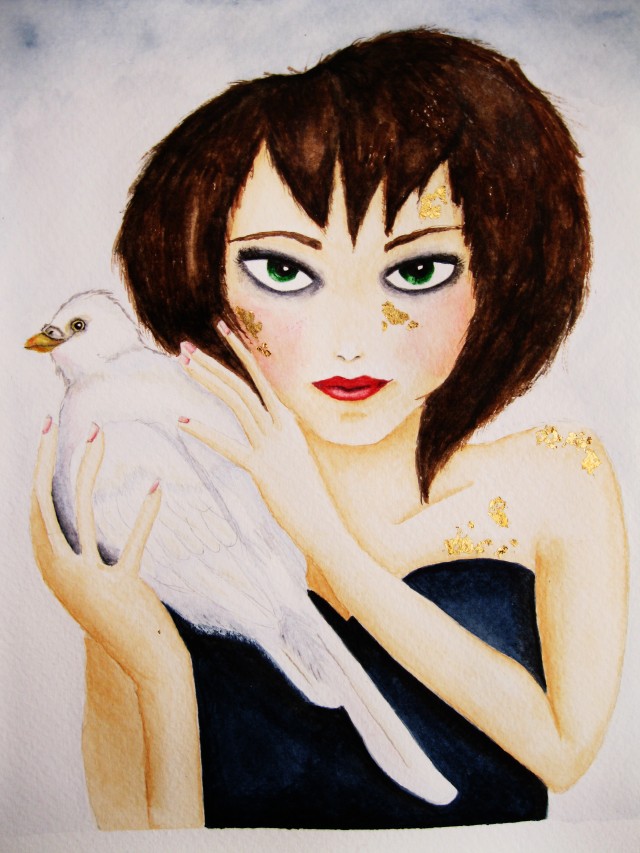 There is a lot of symbolism going on here, I wonder if you can decipher it before I tell the story of where it came from in the depths of my brain.

I’ve been meaning to paint this special lady for a while, but, like with all of the special ladies I’ve painted so far, I needed it to be perfect, both in design and in idea.  It has to represent something because this comes from my heart.  Sometimes I get an idea and it doesn’t work out and I have to put it away for a while, and that is what happened with Gail.  One day I got an idea and ran with it.  Gail took me just over a week to complete.

Here is where Gail started, as a rough sketch on a crappy piece of paper, in pencil after a shitty day on Earth…… 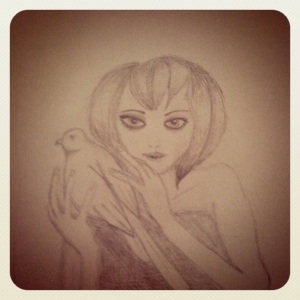 I did have the idea of Gail holding a cat (probably why I drew the hands so far apart to begin with) but I felt like bird had to be involved somewhere and birds and cats don’t necessarily go (even if this is an imaginary painting, my brain won’t allow me to paint the two together unless the bird is in the cat’s mouth).  I knew it had to be a bird, not just because they mean so much to me, but because I want to share the meaning with the person I am painting, almost like sending them a gift. 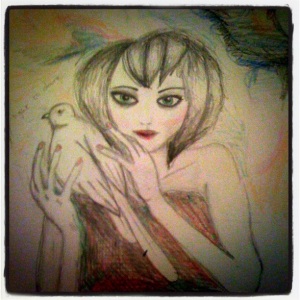 Often when I draw or paint I feel like I’m “in” the painting.  I can’t explain what that means, but it’s almost as if I’m there and the outside world is shut out.  When I’m sketching my brain is colouring it in so although it looks in black and white I know exactly what colours I’m going to use. I use crayons to colour my sketch in, because it’s quick, to make sure the colours my brain has used are right! 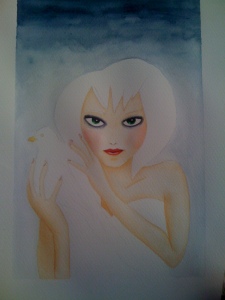 I traced the sketch onto a piece of watercolour paper (making sure to put Gail’s hands closer around the bird!).  Those are stormy skies above Gail’s head.   This is what it sometimes feels like to have depression and anxiety and stuff hanging over you. 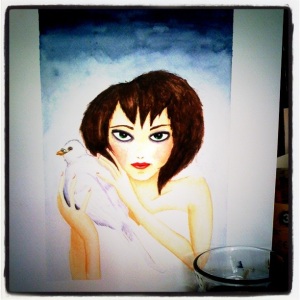 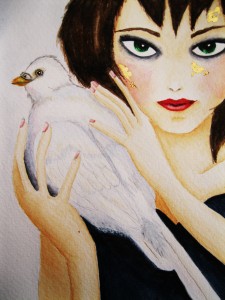 Once I’d finished painting I added some gold leaf.  I was worried it would just look shoved on top of the painting because I really wanted it too look like it was coming from underneath Gail’s skin, sort of like it was peeling off in the storm. What does it mean? Underneath Gail is gold, as in she is a precious and should be protected and treasured (it could also show that she is different underneath from “normal” people, like her human skin is peeling off and the alien is coming out from underneath, but the alien is way more special than a normal human – I know what I mean).

Originally the bird was going to be a swallow, but I decided that what Gail really needs is peace and the bird that best conveys this is a dove.  I thought a white dove would make a better contrast with a dark sky too.  I hope the dove I sent always finds a way to Gail in a storm.